Screening for sleep apnea is essential. Medical experts show it may have led to the recent death of NFL star Reggie White at 43. Should it be required for all men? According to a recent study, men in their 20s need screening the most. That’s because men aged 20 to 29 with extreme sleep apnea have ten times the risk of dying from heart-related ailments than those without sleep apnea in the general population, and a much higher risk than older men with sleep apnea.

The study also revealed that men aged 30 to 39 have three times the risk of fatalities, while those in their forties have twice the risk. But those aged 50 or above don’t have a higher risk of dying than a similar age group in the general population.

“We were surprised to find a sharp decrease in the risk of dying after age 50,” says lead researcher Professor Peretz Lavie. “Older patients have a variety of risk factors, especially cardiac ones, so we expected relative mortality to get higher with age,” he notes. “The fact that they don’t show that patients with sleep apnea create a mechanism, as yet unknown, that shields their cardiovascular system.”

In light of these findings, Lavie prescribes a change in sleep apnea testing guidelines. Currently, patients look for help only when their symptoms stand out and disturb, and the average age of sleep clinic patients is around 50. Lavie believes screening should be held not only for those in their twenties with sleep apnea symptoms but also for other groups shown to have a high prevalence of sleep apnea,” even if they do not have significant symptoms. These include the young obese, people who had hypertension at a young age, or children of sleep apnea sufferers. Diagnosing and remedying sleep apnea at an early age, he says, would reduce fatalities. 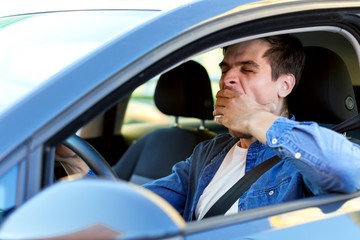 According to Lavie, sleep apnea testing should be conducted using outpatient facilities, and tests could be made ready for home use by patients, encouraging patients to be diagnosed and treated appropriately. He is careful to emphasize that sleep apnea patients who exceed 50 should still be treated, as such treatment will improve their condition and quality of life, and lower the risks of automobile and work-related accidents.

Sleep apnea is shown by interruptions in breathing during sleep that lasts 10 seconds or more, at least five times every hour. They lead to repeated disruption of sleep and decreased oxygen levels in the blood and have been related to cardiovascular diseases, especially hypertension.